Links Which would be necessary for this Section of series

This is how we have to initialise the solidity program by writing down the version we will be using in our script.

Another Note:- I will only talk about the relevant data types for c2

To test this program go to the remix website whose link is given in the beginning of this article and create a file with .sol extension But this program will not give any output yet so let’s move ahead.

Constructors is basically a function which executes as soon as contract is deployed.

To create a constructor the syntax is …

So here we have couple of things to understand such as :-

As we can see sarthak has been printed out .

I will explain this later in this article…

Syntax for a write function

To update the value of test we would do is

Let’s execute this and see what has happened … 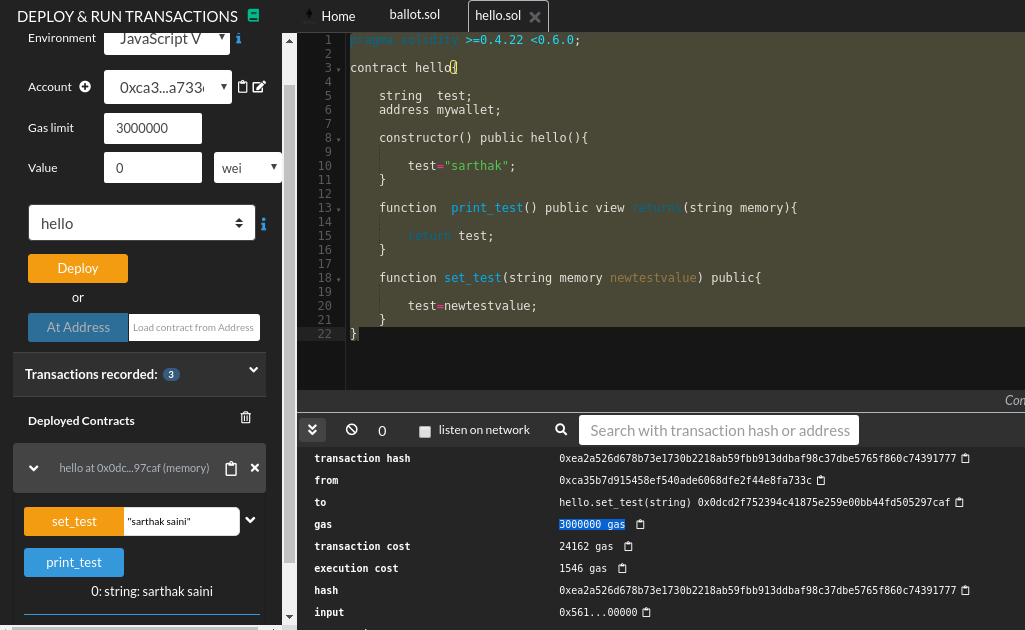 Couple of things to notice that after setting the value to sarthak saini we noticed that a transaction cost has incurred and a gas value has generated ..this basically means that to add or change any value on smart contract we have to pay a certain fees (for the miner who is mining our transaction).

For better understanding please check out Solidity Tutorial at Dapp University whose link has been posted in beginning of this article.

Events are basically logging mechanism which triggers a signals which would give a notification to the listening party basically it means it’s just like how you subscribed to some email notification or like whenever your fav youtuber uploads a video in which he gives reaction to tiktok videos.

So in the same way all the involved party or listeners would get a notification as soon as the event is triggered..this section is quite hard to explain but i will show its implementation in next part as we also need to build a listener.

Whatever is passed in argument will be logged and sent the argument value to every listener which would later be used by us to listen for response from victim’s computer :)

In part 3 we will start building our smart contract for our c2.