Links Which would be necessary for this Section of series

We will be replacing the ganache-cli with infura as it is a api service which let’s us interact with the blockchain without making our own node.

As well as one more change that if you remember we have to use ws with ganache but in this we will be using wss.

So the contract object would now look like this

This will create an object of wallet which has everything like wallet_key and private key,etc.

We have created a solidity handler let us understand it…

We have used _command and _response in order to let our virus or handler know which type of event it shall receive and work on for ex:-

2) When we executed the command id it went in _command keyword after which the output was sent in _response variable so that our handler will catch it.

Note :- We also have implemented a security type feature which will make sure that only the wallet address who created this contract could interact with the functions 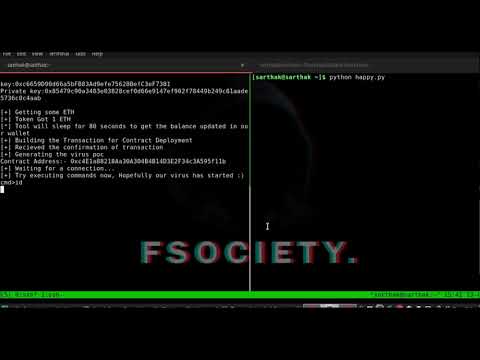 Typically it would take upto 1-2 min for a transaction to be mined that is why i have shown this video with 4x speed.

The Full source code can be found here :- https://github.com/geek-repo/C2-Blockchain

Note:- Do not use this on real server unless you set up any kind of encryption before sending data on blockchain because anyone with wallet address can get all the data fetched and commands executed

This article motivated me to do this on python.